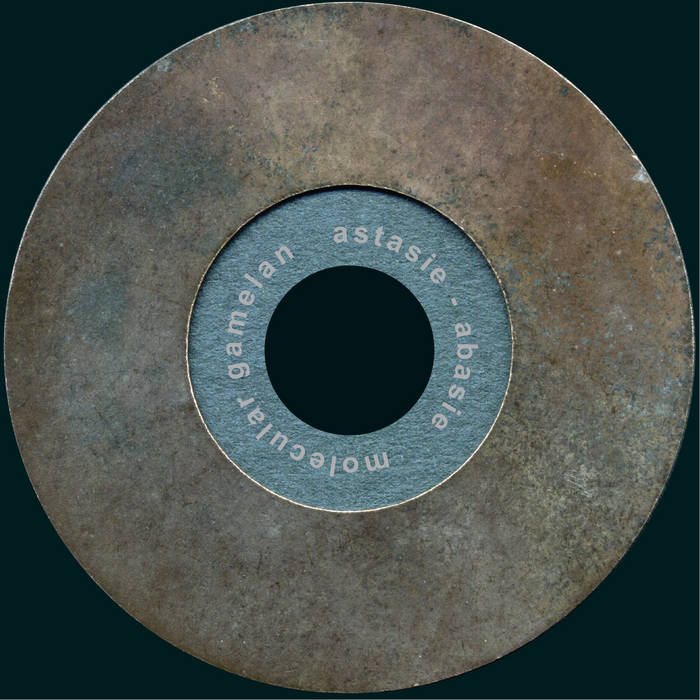 This album is the first in a series of experiments exploring the magnification of the small sounds of small metal objects such as washers.

The chaotic but inherently repetitive patterns created by the interaction between the objects has been realised through a minimum of gestural action by way of a number of distancing strategies, such as the use of hand drills, film winders and motorised drills/screwdrivers.

Astasie-abasie is a project of Ian Andrews which evolved out of a long running performance collaboration with Garry Bradbury. The project focuses on the amplification of small sounds (following the approach of John Cage, Gordon Mumma and David Tudor) through the capture of sounds generated by small objects by way of contact microphones, home constructed cartridges, miniature piezo microphones and conventional microphones. Various devices are used as constraints in order to distance any performing gesture of the artist from the compositional process. The compositional process is, in this sense, aleatory and close to automatic. Much like field recording, sounds are found rather than performed or manipulated. Modified, or ‘prepared’ turntables are often used to bring about the sounds, after which any editing of the material is kept to a minimum.

Ian Andrews works across a number of disciplines including film and video, sculpture, installation and collage, poetry and writing, in order to explore questions relating to utopia and modernism, technologies and the post-human. The work attempts—via a strategy of deconstruction and collage, and the critical juxtaposition of appropriated materials—to locate the point of fracture in discourses of power and discursive regimes, and put into question the organising structures, and break the syntax of the accepted sedimented frameworks that keep thought rigid and ultimately hold us to ransom. His contribution to Australian experimental music reaches back to the early 1980s, including projects like The Horse He's Sick, Kurt Volentine, Cut with the Kitchen Knife and countless others.

"Behind Astasie-Abasie we find Ian Andrews, whom we also know (may know) as such early underground as an act from Australia as The Horse He's Sick, Kurt Volentine, and as Atasie-abasie he explores small sounds from small metal objects such as washers. He worked before on this with Garry Bradbury (erstwhile of Severed Heads) and out those performances grew this. Modified and prepared turntables are used to play these objects, along with hand drills, film winders and motorized drills/screwdrivers and throughout there is a random aspect to all of this. With all the mechanics at play here one might think this is some heavy industrial music, but it is not. Far from it, actually. Think of wind chimes, waving gently in the summer wind on your porch and you have something more like what I hear here. However, there is more to enjoy, as I would think (and might be wrong) there are also delicate electronics at work here. It sounds as if some of this is recorded on some very unstable piece of tape loop, feeding as random back into the mix. There is no such thing mentioned anywhere, so I might be entirely wrong of course. In 'Steam Room In Buitenzorg' for instance, these electronics blend with field recordings and the metal objects take the backseat. In the ten pieces on this album, there is a natural progression, a continuous exploration of the same sounds in various constructions, so it is the same thing over and over in a totally different way. The pieces have titles, but just as easily this is enjoyed as a forty-four-minute piece of music. I found all beautiful, the Zen-like music, the stylish execution and it all made one great CD" - Vital Weekly #1296